Noelle may just be my favorite Christmas movie of the year! This story is full of Christmas cheer, silly moments, and a heartfelt message. I had the pleasure of chatting with Producer, Suzanne Todd, and I can’t wait to share with you her thoughts on this new Christmas classic. 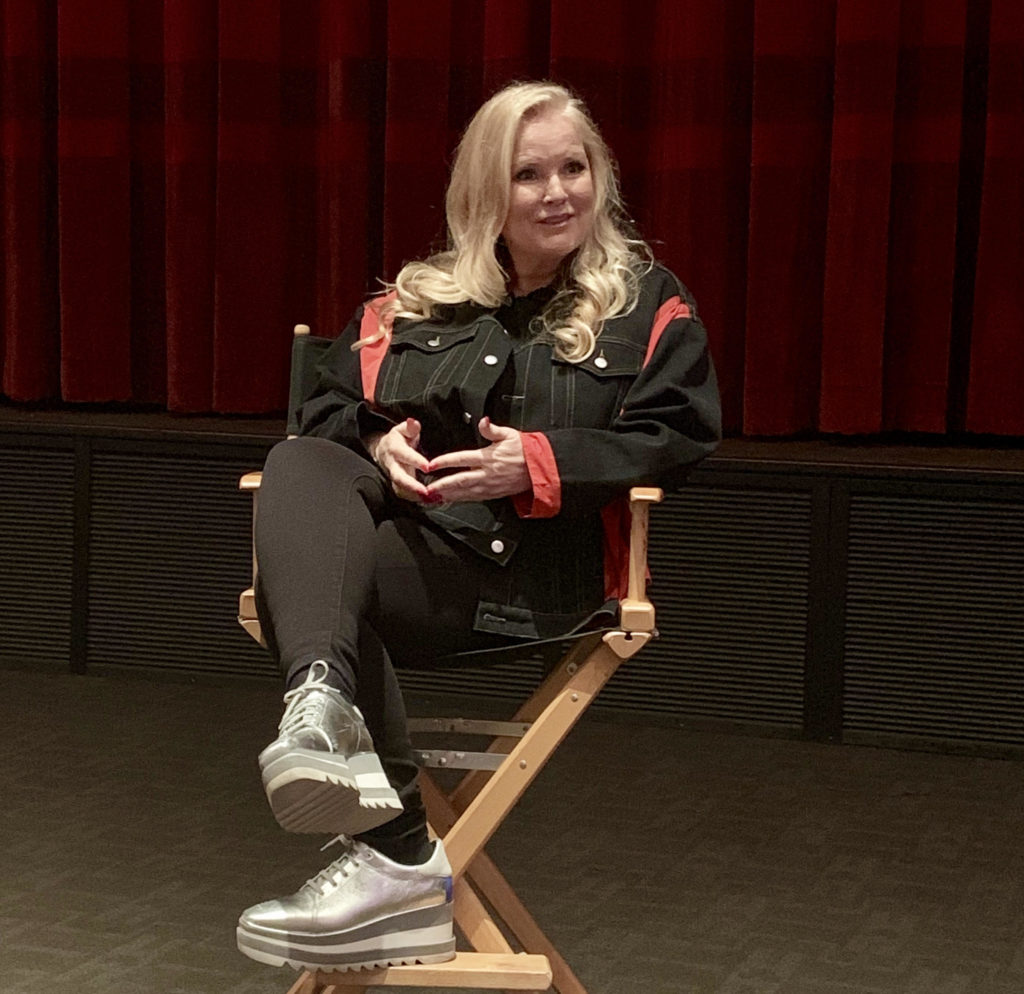 Suzanne Todd is an American film and television producer whose movies have grossed over two billion dollars worldwide. She sat down with a group of entertainment writers at Disney Studios for an interview and screening of Noelle.

Did you film on location?

Suzanne: “We actually built the North Pole. So when you see those scenes and it was charming, and snow-covered in lovely and so beautiful, we were freezing. We were shooting in the middle of the night in a snowball in Whistler, that was actually a venue they had used for the Olympics. We built that whole town. It’s not made on the computer. All those buildings are real buildings. And like I said, we shot outside real freezing snow in Canada.”

“The mall we built on a stage in Canada, and you can see how some of it probably looks more like a stage. Then we also shot at the real mall in Phoenix, but there was so much material to shoot inside the mall that we couldn’t shut a real mall down for that many days because it’s really expensive. You’ll see some of those storefronts like sprinkles and Alex Nanny and stuff, we made those up.”

This movie has the power to really touch people. How did you pull at the heartstrings?

Suzanne: “I’ve seen the movie literally hundreds of times. With these movies that have so many visual effects, you know, the post production is so long. We shot the outdoor scenes at the North Pole, Christmas of 2017. I’ve been working on this movie, literally for years, even since we started, you know, after development and everything and I feel like it all it just all kind of comes together. But I started to say for me even like my 150 of time watching a cut of the movie, when we have those moments of what I call the Santa magic when something’s happening, but Anna’s not really clear yet on what it is that’s happening. Then you see it kind of kick it every time it still gets me that I’m like, Oh, she doesn’t know. She’s really good at that. It’s so aspirational, I think, especially for girls.

Polly seemed more like a Mother figure to Noelle than Mrs.Clause. Was that intentional?

Suzanne: “It was really. It’s a tricky thing when you’re doing Santa and Mrs.Claus. But the thing we didn’t want to just seem like was that Mrs. Claus had nothing to do even though obviously Noelle is the one that gets to cross over and actually be Santa. We wanted it to really play like Mrs. Claus had a role in the North Pole. I think for me and basically every woman who works outside the house, you know, this idea of what’s going on with your kids while you’re busy doing the other things that you need to do was a real thing. We liked the idea that, you know, Polly had basically stepped in when she was young and probably not thinking that was going to go on until you know, as old as Noelle’s character is. We liked the idea that she had somebody who was really more there for her full-time because we envisioned that Mrs. Claus was really kind of the power behind the throne and helping out.”

Message of the film

Besides spreading Christmas spirit, what is one message you would hope that viewers receive?

Suzanne: “I have a daughter myself, I really love the idea of saying especially to the you know, girls and young women and little girls watching the movie that you know some things that feel like limitations or maybe traditionally feel like they weren’t available to you hopefully you know in 2019 and moving forward are more available than you think. And the other really interesting thing for me like I said, as the mother of a daughter, is this idea of expectations. Sometimes, especially for little girls, when we focus on how pretty they are and how lovely they are, we’re setting up a system where we’re not really asking them to expect more than that of themselves. I liked that in a very sweet kind of, entertaining Christmas family movie kind of way, we get to we get to take that on a little. At least plant the seed for people to think about it differently. ”

What do you expect boys to take away from the movie?

Suzanne: “I have one girl and two boys. I loved working with our beautiful cast so much, you know, as I said in the beginning about Anna, we just had spectacularly talented actors. I think for Bill Hader, in his part as the brother, the thing that I really like as a message to boys and to the men is their are expectations on you also. That’s not necessarily what you need to do with your life just because somebody says to you, oh, you’re going to grow up and do x or you’re going to play this sport because that’s what your family expects, or your school expects, or your society, your culture expect. I think for Bill’s character, the character of the brother, he clearly was set on a path that was not actually the right path for him. He wasn’t really good at that. He was being forced into that for all the wrong reasons. For him, he actually had the courage to step off the path and leave town and go teach yoga and find his joy. I think that’s a nice message, for boys and men and all of us.”

I loved how you had the big brother supporting his little sister. Nick could see Santa in Noelle. It was so nice to see that sibling love and support.

Suzanne: “I think it’s this idea of connection. We all live in this very tech world these days, where there’s so much interaction and so much communication that isn’t really face to face and like humans with other humans. I think what you get to see with Bill’s character is that he really sees her. He really is present with her, he really can kind of see her for who she really. It’s so powerful I think for any of us, when you spend time with somebody who really gets you and understands you and can see for who you are. Sometimes it helps you see yourself in a new light, which is really powerful and lovely and you can’t do that via email”

The meaning of Christmas

I love how you showed real life situations, and hard things. Was that intentional and important to you?

Suzanne: Well, I think this notion that you’re talking about which comes out in Noelle’s big speech that she gives in town hall, about what Christmas really means to her is really the essence of what was important to all of us making the movie. The problem that we lean into, especially as women, and I love Martha Stewart more than anybody, but the thing that we lean into at Christmas is that somehow perfection equals happiness.  That’s not really it, when you think back on Christmas.

It wasn’t the meal or the gift or the thing that you wrapped. What we all really love about Christmas is the time we spend with people who are special to us. As Noelle says, presents and food and all the rest of it, but I think this notion of what is really important to you is what matters. Obviously what’s really important to that girl in the movie, was she wants her mom to get a job. For me, as a single mom, it was really important to me that we do the story about how Christmas evolves when your family goes through a transition like divorce, and that it wasn’t about getting his parents back together or having some fake kind of movie ending of happiness. The idea that we want to say to people what I believe is true, which is you can weather that storm and go through something hard and you can find a new tradition or a new way that you’re going to spend that day and even though it may not seem like it’s going to, it may seem like it’ll never be as good as it was in the past, but you can find a way to make new things as good or even better. That was really important to us. I’m so glad that’s how you saw it.”