A fun new family movie just dropped on Paramount Plus this weekend. It’s an action packed superhero movie that both parents and kids will enjoy. While hanging out after school, Charlie and his friends discover the headquarters of the world’s most powerful superhero hidden beneath his home. When villains attack, they must team up to defend the headquarters and save the world. I got to chat with some of the talented young cast from the film. Check it out!

What if your dad is a superhero? For young Charlie Kincaid, that crazy idea never crossed his mind. His father, Jack, seems to be the furthest thing from a hero – super or otherwise. Jack is a typical absentee parent, whose work as an I.T. specialist keeps him away from home much of the time, much to Charlie’s disappointment. 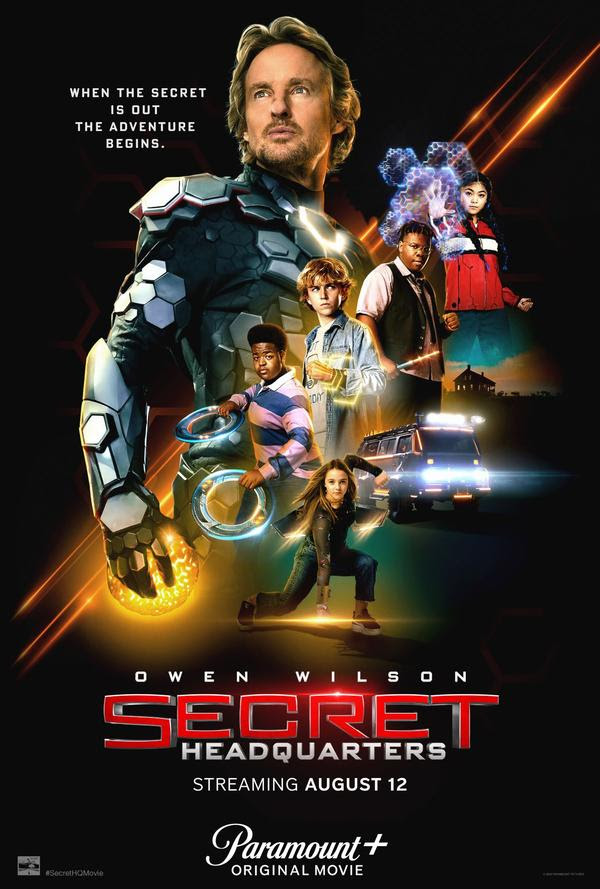 For producer Jerry Bruckheimer, SECRET HEADQUARTERS was a blend of heart, fun, and action. Its core, he says, “is the relationship between Jack and Charlie, and the conflict it creates. Over the course of the film, they begin to connect and become very close – and work together to save the world.” Owen Wilson confirms he, too, was drawn to how the initial “disconnect” between father and son begins to dissolve when Charlie discovers that his dad’s been up to some heroic deeds. “It’s the kind of story that reminds me of some of Spielberg’s work,” Wilson says. Another draw: “I’d been bitten by the superhero bug and had watched [the series in which he stars] Loki with my sons. They were so into that superhero thing, so SECRET HEADQUARTERS, with its superhero The Guard, cool gadgets, and a group of young people becoming new kinds of heroes, came along at the perfect time.”

Owen Wilson says his young co-stars who embody the heroic young people bring much of the heart to the film. “It’s about this group of friends, who aren’t the most popular kids in school, but they’re relatable,” he says. “Their interactions feel genuine.”

This movie is full of fun action packed scenes, laugh out loud moments and a great message for families. The cast shares with me what they hope audience will learn from the film, doing their own stunts and more. Check out the interview below!