P!NK: All I Know So Far, featuring international superstar P!NK, will launch globally on Friday, May 21 exclusively on Prime Video in over 240 countries and territories. I have loved her music for so long, I can’t wait to see this documentary. Passes for a free virtual screening are up for grabs!

Join award-winning performer and musician P!NK as she embarks on her record-breaking 2019 “Beautiful Trauma” world tour and welcomes audiences to join her chosen family while trying to balance being a mom, a wife, a boss and a performer. Mixing footage from the road, behind-the-scenes interviews and personal material, director Michael Gracey (The Greatest Showman) gives audiences a glimpse behind the curtain of the circus that she calls life. P!NK: All I Know So Far is produced by Michael Gracey and Isabella Parish in conjunction with Luminaries, Silent House and Lefty Paw Print. Sounds like a great story full of my favorite music! 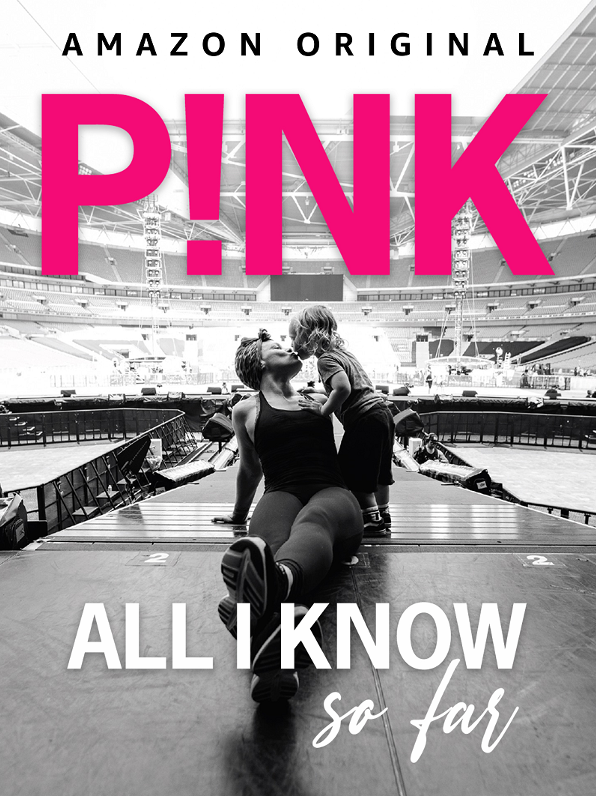 Grab your set of tickets to a free virtual screening here!

Since her debut in 2000, P!NK has released 8 studio albums, 1 greatest hits album, sold over 60 million albums equivalents worldwide, 15 singles in the top 10 on the Billboard Hot 100 chart (four at #1) and has sold out arenas all over the world.  In addition, she is the recipient of three Grammy Awards (twenty nominations), one Daytime Emmy Award, seven MTV Video Music Awards (including the 2017 Vanguard Award recipient), two MTV Europe Awards, two People’s Choice Awards, was named Billboard’s Woman of the Year in 2013 and most recently received a star on the Hollywood Walk of Fame as well as The Brits Outstanding Contribution To Music Award (the first international artist to receive this honor).

Her last studio effort Hurts 2B Human marked her third consecutive album to debut at #1 on the Billboard 200 Chart as well as debuted at #1 in 8 other countries.  The first single, “Walk Me Home” marks P!NK 10th #1 on Billboard’s Adult Pop Airplay chart and extends her record for the most at this format across all solo acts.  The track along with “Can We Pretend” scored P!NK her 6th and 7th #1 on Billboard’s Dance Club Songs Chart.  At the end of 2019, P!NK wrapped her highly acclaimed Beautiful Trauma World Tour where she played over 156 shows in 18 countries ultimately selling over 3 million tickets worldwide.  The tour is the 10th highest grossing tour in Billboard’s Boxscore’s history, the biggest tour for a woman in over a decade, and she received Billboard’s Legend of Live Award in November 2019.

P!NK is a huge supporter of various charities, including: No Kid Hungry, Make-a-Wish Foundation, Planned Parenthood, REVERB, Autism Speaks and Human Rights Campaign, and as an ambassador for UNICEF.

Monster Jam® Returns to DC January 26-27
The Call of the Wild - Free Passes!
Win Tickets to See Disney's THE NUTCRACKER AND THE FOUR REALMS * DC