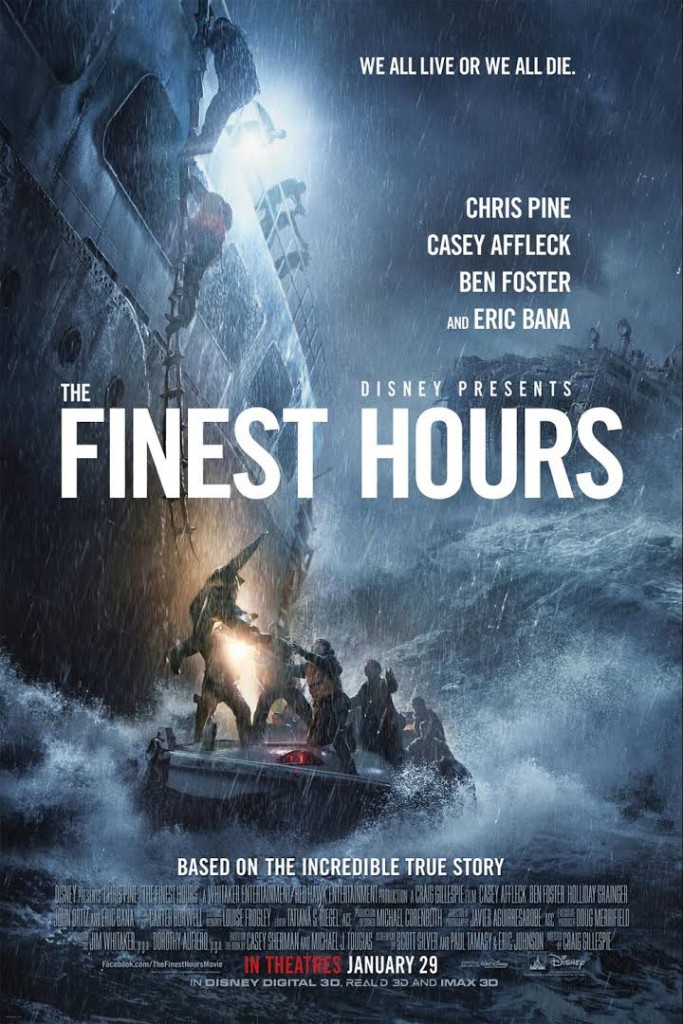 The Finest Hours tell the incredible true story of a breathtaking rescue mission. The most daring mission in the history of the Coast Guard! It takes place in a small town in New England on February 18th, 1952. A horrendous storm struck the New England area towns and all along the Eastern sea, making it impossible for ships to sail through. More specifically, the SS Pendleton, a T-2 oil tanker headed for Boston.

This ship was torn in two by the storm and in desperate need of a miracle. After all, who would be crazy enough to risk their own lives to save these men? Ray Sybert (Casey Affleck) is left to step up and take action and bring his crew to safety. Not all goes as planned or anticipated. To stop and think that real men went through what you watch take place on screen is riveting.

Meanwhile, as word of the the disastrous effect of the storm reaches the U.S. Coast Guard station, the Warrant Officer Daniel Cluff (Eric Bana) orders a mission to rescue the men from the SS Pendleton. This was a mission most would refuse due to the very fact of little to no survival odds. Four courageous men, led by Coast Guard Captain Bernie Webber (Chris Pine), set out in a wooden life boat made to hold 12 and with an ill-equipped engine. Not to mention, these men are literally going straight into the eye of the storm! Navigating is out the window as they face freezing temperatures, 60-foot high waves and hurricane-force winds. Ah! My stomach was definitely in knots as they rose over waves and crashed back down again and again.

The portrayals and cinematography in this film blew me away. It made me feel as if I was there sitting in the life boat or awaiting a miracle rescue on the ship. I cheered and rallied along with the men as they made their way back home. I love that it is presented in Digital 3D™, Real D 3D and IMAX® 3D. It really does give a fully-immersive experience that you don’t want to miss!

Best Quotes from Disney's Flora and Ulysses
The House with a Clock in Its Walls ~ Screening Passes!
Dragons: The Nine Realms Interview with Marcus Scribner & John Tellegen